As I was doing my morning routine, which lately includes sifting through the previous night’s exposures for various reasons, a particular set of images caught my eye with one being exceptionally flashy: 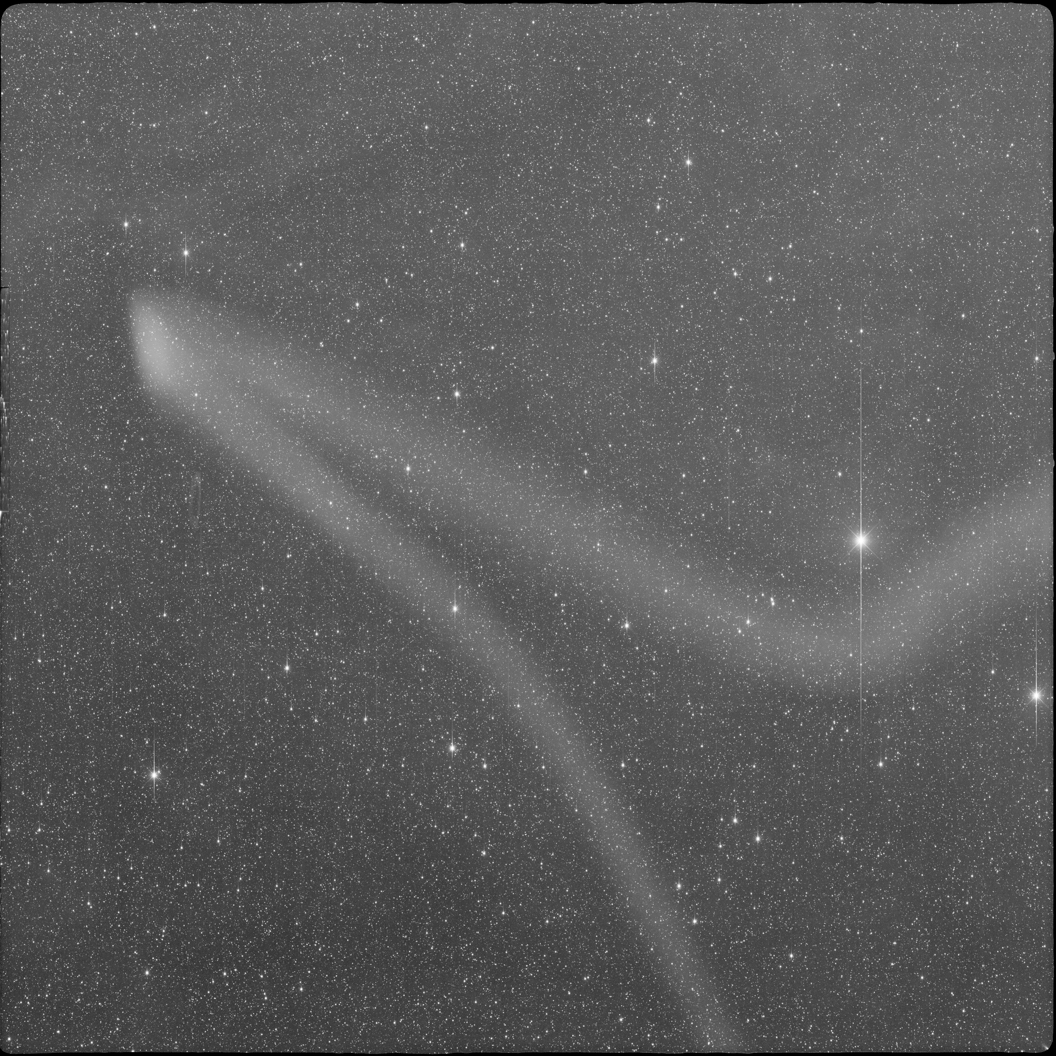 Now, what on Earth could that be, I thought to myself, with mouth agape and eyes wide.  Then, I spotted the other two obvious images that indeed showed a meteoroid entering the Earth’s atmosphere.  We have seen many meteors in our data in the past, but nothing ever this strange looking!  So I looked closely at the other two images, which it quickly became apparent that they were all three different parts of the sky.  What’s more, they’re all right next to each other–now this is getting interesting!  I began to wonder, could this be some kind of erratic path that it took as it broke up?  Let’s stitch them together into a mosaic to see what it looks like.  The results looked puzzling when I first constructed the mosaic: 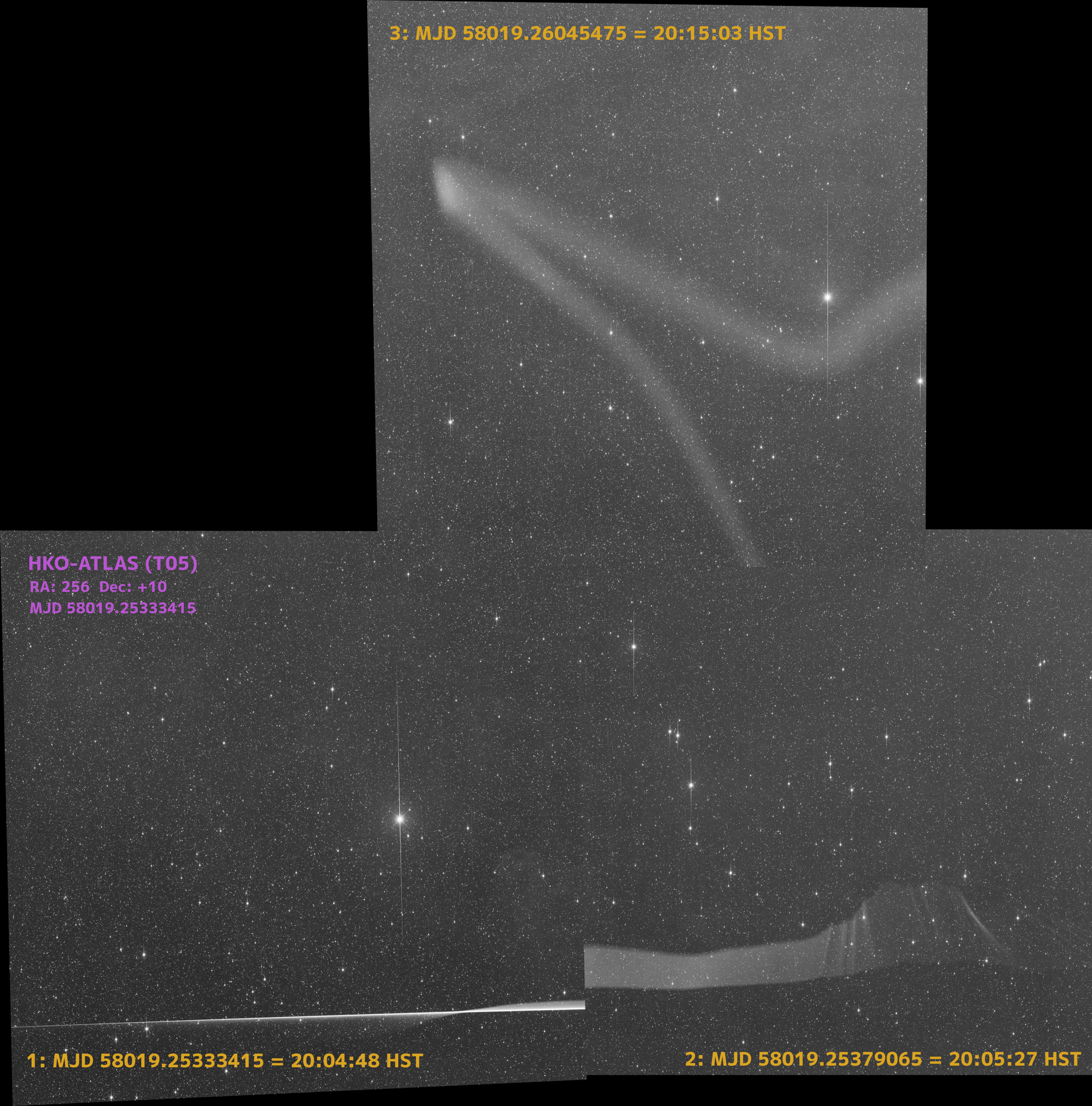 The discontinuities made sense, because of time difference between images, but I wasn’t sure if the object had split up and that’s what was causing the big looped trail in the third image.  But wait a minute–ahah!  We use an ‘auxiliary’ camera on the ATLAS telescopes that matches in exposure length and timing to the main camera.  So I went to pull those images and chucked them together.  Finally, a coherent picture of what happened! 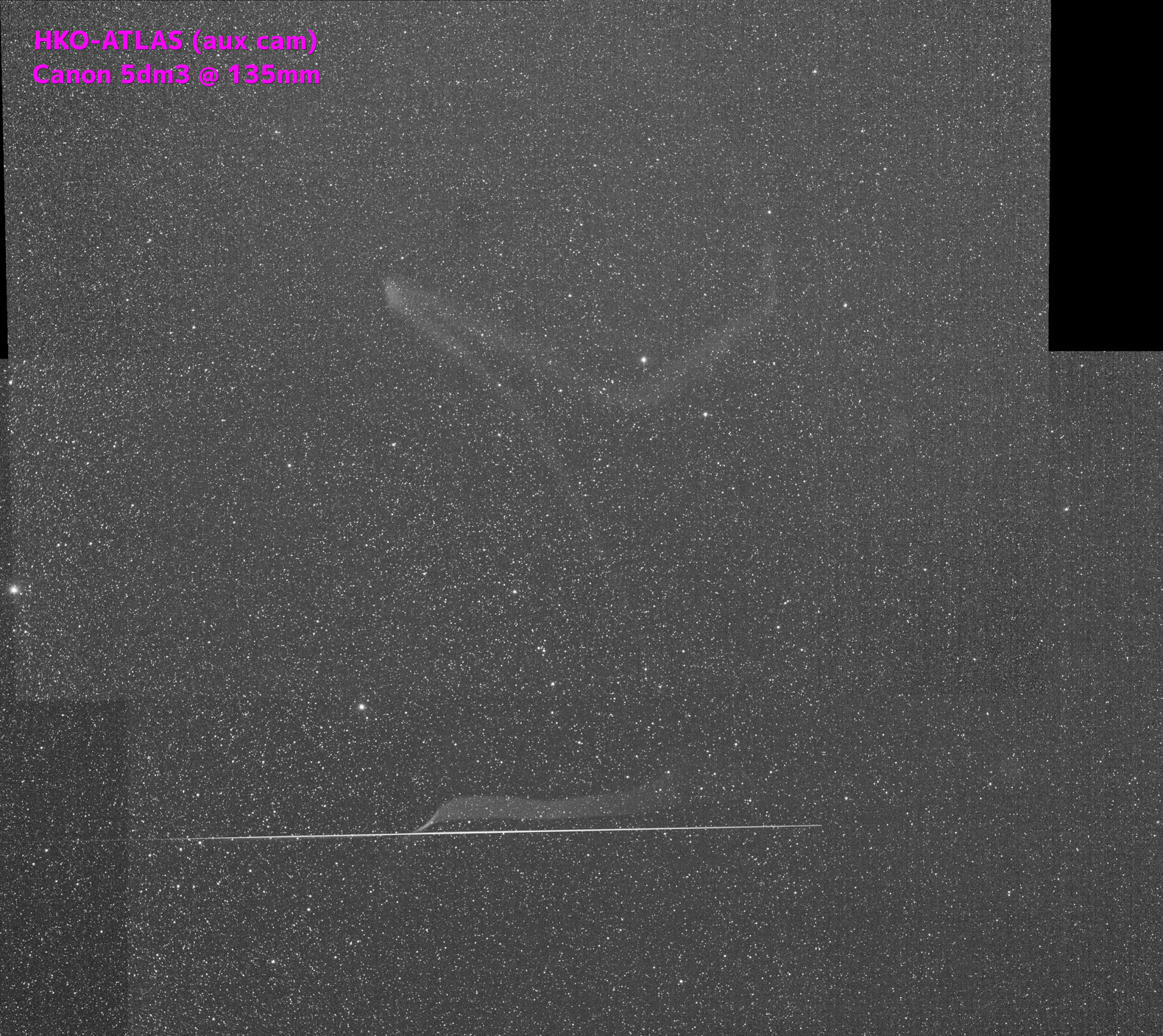 ATLAS is happy to report that we have recently replaced the Schmidt correctors on both of our telescopes!  The original Schmidt correctors did not make really sharp images even at best focus, so our DFM telescope was not performing at its real capability.  The new correctors from Coherent make star images that are only 2 pixels wide! 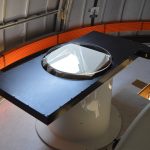 Replacing the correctors was straight-forward and without any trouble.  The procedure was fairly short, and involved removing the top portion of the OTA, which holds the mechanical shutter and corrector plate.   Then, we came up with a very simple yet elegant plan to remove the corrector from its cell by simply lowering the top portion of the OTA onto a bar stool, and allowing the stool to capture and “lift” the corrector plate right out of the top portion of the OTA.
Once we replaced the correctors (we all know the dreaded new-telescope-equipment curse which causes clouds to form overhead for days or even weeks following) and were able to take first-light images, the new images revealed slight optical misalignments of our telescopes that were previously undetectable.  This brought on a period of detective work figuring out the misalignments through ray-tracing, followed by several long, cold nights sitting beside the telescope making minute adjustments.
However, all the hard work from the ATLAS team paid off, and we saw a great increase in performance that was reflected in things such as our PSF and sensitivity gain.  We are quite pleased with the results and are loving the new, sharp star images across the entire field.