During the week of December 10th ATLAS made a trio of new discoveries: two Near Earth Objects (NEOs) and one comet. Their orbits were determined automatically by the ATLAS software, and reported to the IAU Minor Planet Center at the Smithsonian Astrophysical Observatory.
The largest object, numbered 2015XU378, has an estimated diameter of 250 meters, and is classed as a Potentially Hazardous Asteroid (PHA). It passed within 0.066 AU (10 million km) of the Earth on December 8th.
The other NEO, 2015X168, has an estimated size of 50 meters: its perihelion distance is 0.82 AU, which means that during some parts of its orbit it is closer to the Sun than is the Earth.
The comet that ATLAS found, C-2015X7, has a perihelion distance of 3.8 A.U, so no threat to Earth. UH astronomer Richard Wainscoat confirmed the discovery by taking a pair of images (below) using the CFHT telescope. They confirm both the extended shape of the image and its changing position relative to the background stars. 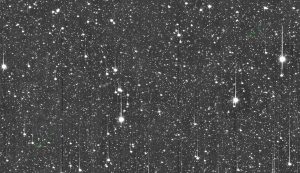 ATLAS has discovered its first near-Earth object (NEO). The image shows the beautiful starfield the asteroid was crossing when we discovered it (more on this below). The new asteroid has received the designation 2015 PE312 from the Minor Planet Center (MPC). Its brightness indicates that it is probably 200-500 feet (60-150 meters) in diameter.
The reason for the wide range in possible sizes is that a large, charcoal-black asteroid could have the same brightness as smaller one made of light-gray rock. We could tell the difference with sensitive observations from an infrared telescope (dark-colored asteroids absorb more of the Sun’s heat and glow brighter in the thermal infrared), but no infrared observations have been made of  2015 PE312 so far.
To receive an official designation (i.e., to be truly ‘discovered’), an asteroid has to be measured at least twice each on two different nights. It’s important to have a rule like this because it’s easy to mistake variable stars, cosmic rays, and other ‘image artifacts’ for asteroids. Watching how objects move from image to image and night to night is what allows us to distinguish real asteroids from lookalikes. ATLAS observed 2015 PE312 eight times in all: four times each on the nights of August 9th and 10th. Although we have learned that one other asteroid survey took images of it without knowing it, ATLAS is the only observatory in the world to report observations of 2015 PE312 to the MPC. If not for us, the object would still be unknown to the human race.
Finding a faint, fast-moving object like 2015 PE312 against the confusion from countless thousands of background stars is quite a challenge — one that ATLAS and other asteroid surveys meet with a lot of hard work and clever computer programming. The starfield image above has all eight detections of the asteroid added in at their correct positions and brightnesses, and indicated with green circles (click on it for higher resolution). The asteroid was moving from upper right to lower left: the detections from the night of August 9 are bunched together near the upper right, then there is a big gap that corresponds to the daytime interval between observing nights, and then the images of 2015 PE312 from August 10 are bunched together at the lower left. You will probably have to click on the image to download a higher-resolution version to see the green circles and the tiny points of light representing 2015 PE312.
An accurate, computerized orbit calculation was required to be sure that the two sequences of faint images were actually the same asteroid. This calculation showed that 2015 PE312 made its closest pass to Earth on August 19, at a safe distance of about 2.7 million miles (4.3 million km, or 0.03 AU). This is about eleven times as far away as the Moon.